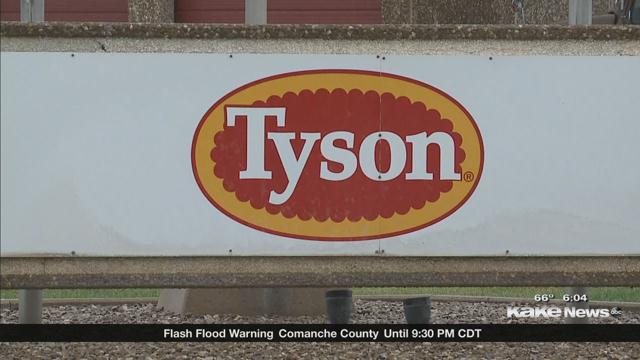 When the city of Tonganoxie and Leavenworth County pulled out of the deal to have a Tyson chicken plant there it opened the door for other Kansas communities to compete for the facility.

Monday leaders in the cities of South Hutchinson, Hutchinson and Reno County met to figure out how they could put a proposal together that might get Tyson to build in their area.

Debra Teufel, President and CEO of the Reno County/Hutchinson Chamber of Commerce was in on the meeting.  Teufel said, "Any project, like this, has a tremendous economic impact."

The Tyson plant, they say, would employ 16-hundred workers.  Kansas Department of Agriculture Communications Director Heather Lansdowne says those jobs would pay $13-to-$15 an hour while some higher skilled jobs will pay $20 an hour.

Stiles said, "When you start throwing around numbers like that.  Sixteen hundred jobs, a quarter billion dollars of investment, that's a game changer in any community, especially Kansas."

But Teufel said "We, as a county, would be hard pressed to come up with 16-hundred people to go to work for a company tomorrow."

South Hutchinson is proposing Tyson build on a 150 acre site a few miles south of the city.  It's close to highways, an important factor.  But Stiles said the Tyson plant requires two million gallons of water daily, something the city doesn't have.

The labor and water needs are why Stiles and Teufel both say something like this will require communities partnering to make a proposal to Tyson.

Lansdowne, with the Ag Department, said, there's more to the project than the $320 million building investment and the 16-hundred jobs.  Lansdowne said there would also be,  "A grower network, which would mean, there would farmers and ranchers in the region who would have the opportunity to be a part of that growing of the poultry. It means there would be a lot of small farmers, ranchers who could have the additional development of their agricultural operation.  In addition all those birds would be eating food.  And so all the grain, the crops, the farmers who grow those crops, corn and soybeans, in particular would have a really good regular source of sales for their products. This would be a huge benefit."

She said the state is working to try to keep Tyson interested in building in Kansas despite being turned down by Leavenworth County.