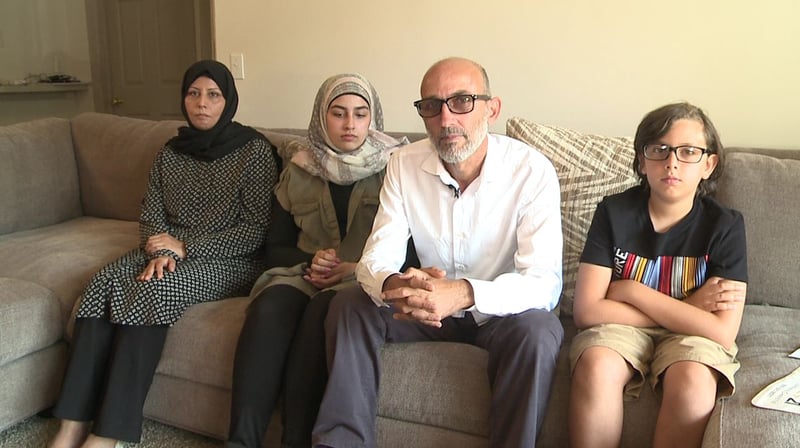 Sattar Ali is questioning his family's return move to Wichita following an attempt to deposit a check at his bank which landed him, his wife and daughter in police custody..

The Ali family recently sold their home in Dearborn, Michigan.  He moved back to Wichita, he said, to finish his doctoral degree in mechanical engineering at Wichita State University where the Ali's 18-year-old son is also a student.

Ali said, "I went to the bank to deposit the check and I took all of the documents with me to verify."

The check was for just over $151,000.  "And I told them I don't need it until I find a house.  So keep the check with you, verify, take your time."  "Simply we were just going there to deposit a check.  We were not asking for money."

But he said his experience started to go down hill.  Ali said,  "And I was talking to them for less than five minutes and I found the police behind me, handcuffed me, confiscated everything and took me outside."

His wife Hadil and their 15-year-old daughter Hawra were waiting in the car outside the bank.  Police take them into custody also and take all three downtown to police headquarters for questioning.  And while holding the family for nearly three hours, police called the private school the Ali's 11-year-old son attends in Andover, telling the school to hold their son because the family was in police custody.

A statement from Wichita police says police were called to the bank for an attempted forgery.

The Ali's are Iraqi-Americans and are American citizens.  Ali said the family lived several years before in Wichita when he worked at Cessna Aircraft before taking a job with Chevron taking the family away from Wichita.

Ali believes he was being racially profiled and has him questioning returning to Wichita.

He asks, "Does Wichita not welcome any foreigners?  Then tell us.  Be up front and forward with people and say, you are not welcome in our city."

Ali was puzzled with why the bank couldn't seem to verify the check but police did.

".. We are aware of a situation at the 21st and Woodlawn branch yesterday and can confirm that our team acted in accordance with our policies and procedures. If faced with the same circumstances today, we would expect our team to take the same actions."