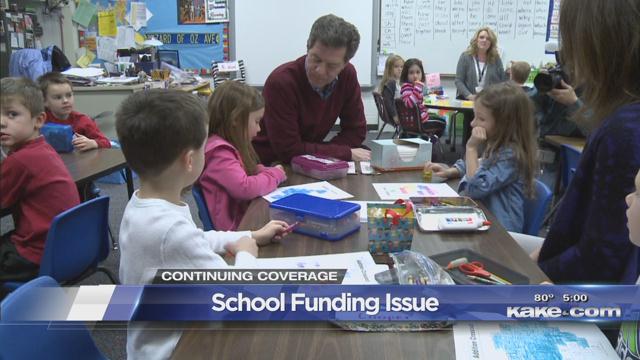 For hte first time in several years many Kansas school districts are able to actually increase their budgets rather than looking for places to cut.

"It's a step in the right direction," said Wichita School's Chief Financial Officer Susan Willis to Quake's Chris Frank.  "It's not enough to compensate for years of cuts. But it's certainly a better place than we found ourselves since 2009."   That's the year, she says, when the state started imposing budget cuts on Kansas schools.  Willis says Wichita schools cut about $100-million from its budgets since 2009.   "The fact that we didn't have to have those conversations this year was a welcome change."

But this year Willis said Wichita increases its budget by $20.6 million.  The total budget for the upcoming school year is $682.6 million.

She said budget cuts in recent years brought stress for schools, students and their parents.  "That stress level for staff should start to diminish just a little bit. I think parents might see that change and maybe some optimism as far as education is concerned."

She said altogether the budget increases should lead to improved overall test scores.

Now Kansas schools continue to wait for the expected ruling by the Supreme Court on the School Finance arguments heard July 8th in Topeka.

Willis said, "We're hopeful that the Supreme Court will make a determination that an investment in kids is the right direction."

A ruling in the school's favor could lead to even more funding for the schools.