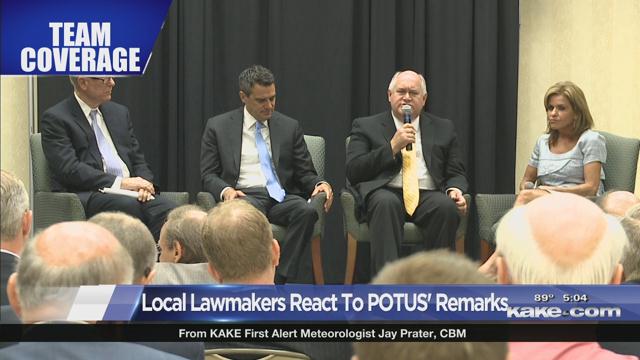 Critics slammed President Donald Trump's initial statement on the violence in Charlottesville, Virginia over the weekend saying he should have called out the hate groups by name.   The President, from the White House Monday afternoon, did condemn the KKK, neo-Nazis and white supremacists calling them "criminals and thugs."

But it was this initial weekend statement from the President which had critics reeling. "We condemn in the strongest possible terms this egregious display of hatred, bigotry and violence on many sides."  Critics said he wasn't forceful enough in not naming hate groups.

Monday morning KAKE news caught up with three Kansas U.S. Representatives along with Senator Pat Roberts who all were part of a panel at the Kansas Independent Oil and Gas Association convention in Wichita.

Senator Roberts, (R) defended the President's statement saying,  "He made a pretty broad statement that he really referred to all groups, all hate groups whether it's a white supremacist group or any other."

Rep. Ron Estes, (R), Wichita said,  "I think the President was pretty clear in saying he deplored the situation that happened.  Maybe he didn't use the exact working that some people were looking for.  But it was pretty clear that he didn't condone the actions at all."

Rep. Kevin Yoder,(R) Overland Park said he wished the President had made a stronger statement in the beginning.  Rep. Yoder said, "I think we need to be clear and direct that white supremacists, KKK have no place in America."  "I do think the President missed an opportunity to unify the country."