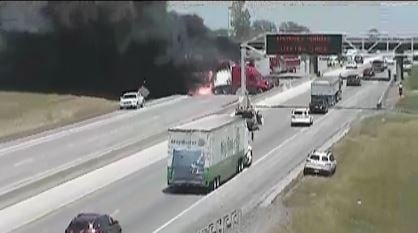 Authorities say five people have died in a fiery six-vehicle wreck that temporarily closed a stretch of Interstate 70 on the western edge of the Kansas City metropolitan area.

Kansas Turnpike Authority spokeswoman Rachel Bell says the pileup started Tuesday afternoon when a tractor trailer hit a car, a sport utility vehicle and another tractor-trailer just west of Bonner Springs. The Kansas City Star reports that two people in the car and two in the SUV were killed. Both tractor-trailers were engulfed in flames.

Authorities later found the fifth victim and two other damaged vehicles while clearing the wreckage.

Bonner Springs Mayor Jeff Harrington described the wreck as "a tragedy" and offered condolences to the victims' families.

The crash closed the highway in both directions for about two hours.

Sheldon H. Cohen, 83, who was driving a Buick LaCrosse and passenger, Virginia Cohen, 79, both of Topeka, died. The driver of a GMC Terrain, Teresa J. Butler, 61, of Urbana, Illinois, and a 63-year-old unidentified passenger were also killed, as well as the driver of a Ford Taurus, Ricardo Mireles, 38, of Topeka.

KMBC contributed to this report.

One lane of eastbound lanes reopened about 4 p.m. but westbound lanes were expected to remain closed for several hours.