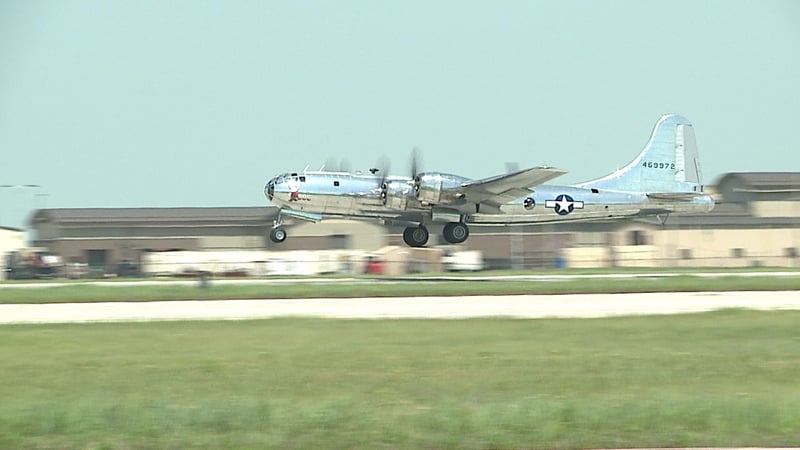 The propellers on the B-29 Flying Fortress known as "Doc" were turning once again Friday -- and in the co-pilot's seat sat a man whose name may sound familiar to World War II history buffs.

Tibbets' grandfather Colonel Paul Tibbets flew the famous Enola Gay, which dropped the first atomic bomb used in wartime combat during the bombings of Hiroshima and Nagasaki Japan. The pair of explosions killed more than 100,000 people -- tens of thousands of whom were Japanese military personnel.

Many credit the bombings with ending the Pacific theater of World War II.

Tibbets said flying "Doc" was an opportunity to honor his father's legacy.

"Military aviation has played a significant role in the defense of the nation and securing the freedoms that all American's enjoy," Tibbets said.

Mark Novak, the pilot in command of "Doc," said it was an honor to sit alongside Tibbets.

"It's neat, I mean I would say celebrity, that name, especially for guys that fly and are in the military they know that name," Novak said.

Aviation buffs will see the plane and meet Tibbets this weekend at a Missouri airshow.

As Tibbets stepped into the plane in Wichita Friday he hoped the B-29 Superfortress could be a learning tool for folks about World War II.

"I think it's fascinating that we can take history on the road. When we can have an airplane like this B-29 here that changed the world," Tibbet's said.

"Doc's Friends" continue efforts to raise money to build a hangar for the plane. They want to keep the home for this piece of World War II history in Wichita.