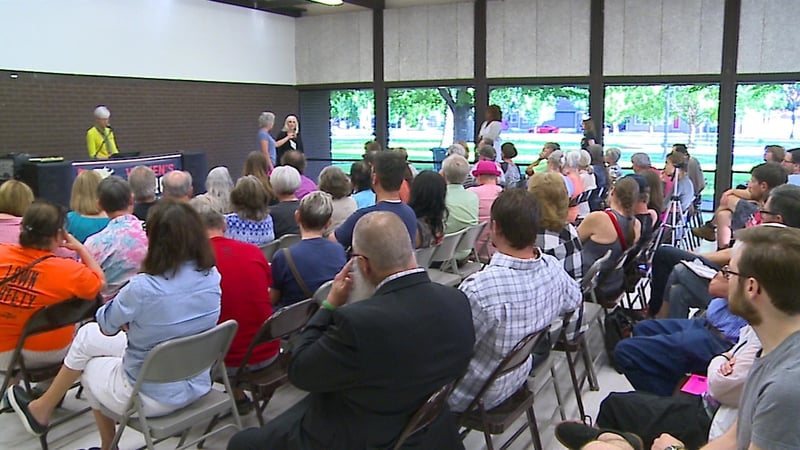 Since the November election there have been a number of town halls and rallies for a wide variety of groups, but the Women's March Air Capital Town Hall is part of a growing effort to influence change at the grassroots level.

The town hall meeting, at the Hyde park center near old town.  Kansas senators Jerry Moran, Pat Roberts and U.S. Representative Ron Estes were among the local leaders on the guest list, but is was quickly apparent, the only guests that would be showing up, would be taxpayers.

"And with vouchers, gosh darn if they are a bad idea," said Alex Vulgamore, a college student studying to be a teacher.

Along with school funding and the state budget, many here are worried about the futures of healthcare.

"If the insurance isn't there where is the safety net for my child," said a woman, who did not give her name.

This event is part of a grassroots effort.

"I think that we sort of learned from the Kochs, that you've got to start getting people in," said Jan Manlove, treasurer of the Sedgwick Democratic Women.

Manlove believes this meeting like others across the state has given voters a louder voice.  Grassroots because money to keep their effort going comes from donations and fundraisers like garage sales, like manlove put on.

"We raised, well actually with donations from out of state that came in we raised about $2,200."

Many at the event want a chance to speak with federal officials, but they'll have to wait. Manlove just hopes that she can help others get involved in their democracy.

"Most of Kansas we're just middle of the road people, you know we're not radical one way or the other. We want to see a functioning government," said Manlove.

KAKE News reached out to Ron Estes' office and they gave us this statement. It reads "Congressman Estes has a full schedule during each district work week.  His calendar is fully scheduled weeks ahead, as requests have been coming in since before he was sworn in.  He has been meeting with a wide variety of constituents, organizations, schools, and businesses, and looks forward to continuing a robust district schedule which accommodates as many requests as possible.  Additionally, the Congressman hosted his first tele-town hall on May 9, where 4,500 residents across the 4th District opted to join in on the call.  He is committed to hosting these regularly."

KAKE News also reached out to the offices of Senators Moran and Roberts. Senator Moran is speaking in western Kansas tonight, and Senator Roberts has commitments related to his duties as Chairman of the Senate Agriculture Committee.