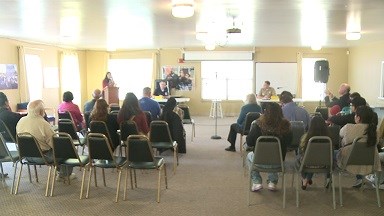 A group concerned about proposed changes to immigration policy invited officials with Wichita's law enforcement agencies to participate in a community discussion.

Topics varied from punishment on drug possessions to use of force by officers, but what brought most people in was to hear how law enforcement will treat new federal immigration guidelines.

Sheriff Jeff Easter along with Wichita Police Chief Gordon Ramsay were on hand as people asked them about their concerns on immigration.

Chief Ramsay says the W-P-D receives dozens of calls a day and has neither the time or the authority to enforce Federal regulations. Ramsay went on to say enforcing immigration policies is the job of the Federal Government. "We don't do Federal Law. We are not the immigration police. We are not checking for immigration."

Lonny Wright attended the discussion and said he understands why local law enforcement has their stance on immigration. "They are just swamped with their other duties, you know dealing with violent crimes and property crimes things that have a much higher priority for them."

Ramsay said they are not sufficiently trained to enforce immigration law, and he says some of the proposals to do so could involve racial profiling. "We can't encourage, we can't allow racial profiling. Period."

However Sheriff Easter did issue a word of caution to the Wichita community.

"As the Sheriff's Office we will have to follow the law when or however it's changed."