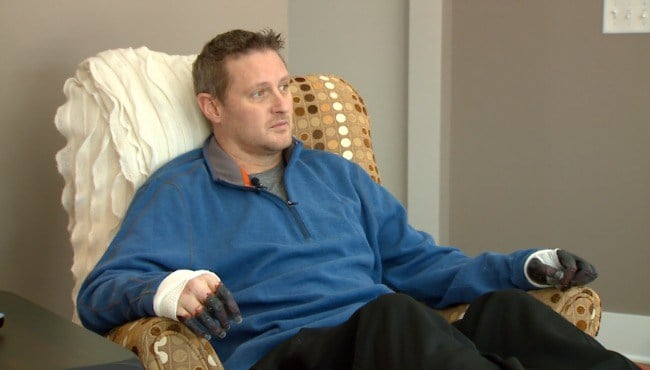 WARNING: This video contains images that some people may find disturbing. Viewer discretion is advised.

The man who nearly died from strep throat that traveled to his stomach underwent his first amputation surgery this week. He will eventually lose both hands and both feet.

Kevin Breen, a 44-year-old who was active before the strep was in a wheelchair, going into surgery. His wife was with him.

Wednesday doctors removed his right foot. He will have at least three more surgeries.

On Christmas he started feeling pain in his stomach. He ended up going to the ER, but doctors couldn't figure out what was wrong with him. They finally figured out that he had a strong strand of strep that traveled to his stomach.

Doctors saved his life, but in the process his organs began failing. In an effort to save them, his body redirected blood flow, leaving the flesh of his hands and feet to die.

He has a long way to being active again, but he is pushing through with a positive attitude.

"I'm a little nervous...but I'm confident and we've been praying about it. We met with our pastor earlier today so I'm kind of ready to get the process started."