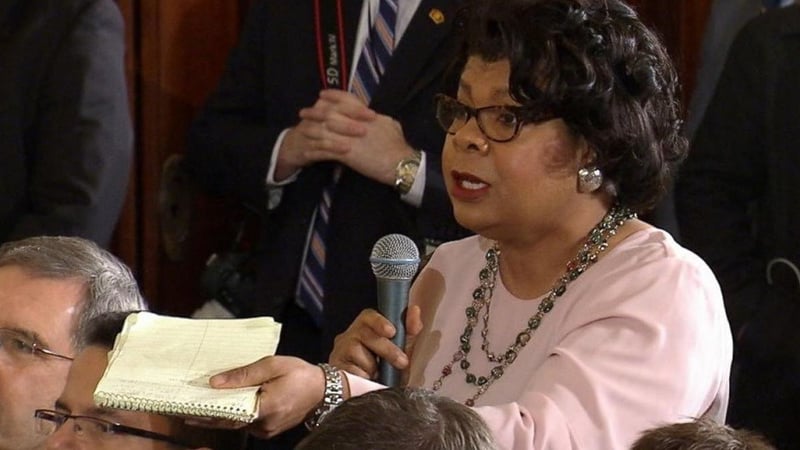 President Donald Trump raised eyebrows Thursday afternoon when he asked a black reporter at a free-wheeling press conference to arrange a meeting with the Congressional Black Caucus.

“Do you want to set up the meeting?" Trump asked April Ryan, the White House correspondent for American Urban Radio Networks. “Are they friends of yours? Set up a meeting. Set up the meeting. I would love to meet with the Congressional Black Caucus, I think it's great.”

Ryan asked Trump Thursday whether he would include input from the Congressional Black Caucus when developing policy for inner-cities. Trump responded with an anecdote about Rep. Elijah Cummings, D-Maryland.

"I actually thought I had a meeting with Congressman Cummings and he was all excited then he said, 'Oh, I can't move, it might be bad for me politically. I can't have that meeting,'" said Trump. "You know, we called him and called him, all set, I spoke to him."

Trump supporters cheer his combative stance with the media

Cummings, who said Trump called him in January after seeing his appearance on MSNBC's "Morning Joe," responded to Trump’s comments with some confusion, saying he is looking forward to discussing prescription drug prices with Trump. He noted that he didn’t know why he was referenced by the president in response to the question about meeting on inner-cities.

The Maryland Democrat denied that Schumer told him to skip a meeting and that instead he was waiting until he and fellow legislators were “in a position” on prescription issues that they “could present something to the president."

"As soon as we finish, we’re going to meet with him,” Cummings added, saying of Trump’s comments, “I took no offense whatsoever.”

Thursday evening, the White House said it was working to set up a meeting with the CBC.

Following the press conference, Rep. Emanuel Cleaver, D-Missouri, the former chair of the CBC, told ABC News that he was not amused and that he could barely believe what he was hearing. He was joined by Rep. Bennie Thompson, D-Miss. who called the request "disingenuous."

In an appearance on CNN, Rep. Maxine Waters, D-California, criticized the president's treatment of Ryan.

"It was inappropriate for him to ask the journalist to set up the meeting...He should have an office that is organized in a way that he would have people with certain responsibilities," said Waters. "That is not her responsibility to set up a meeting.”

On Twitter, the CBC linked to a letter they wrote Trump on Jan. 19 which outlines issues of importance to the caucus and includes an “invitation to engage in an earnest effort to work together” though does not specifically ask for a meeting.

Hi, @realDonaldTrump. We’re the CBC. We sent you a letter on January 19, but you never wrote us back. Sad! Letter: https://t.co/58KiuHmITF

"I was sitting there, I could have asked questions on Russia as well," Ryan said. "I'm very versed in a lot of things but it's unfortunate that when you see me, you see my color. But I am a journalist and I asked the question and I got an answer -- I got his answer."