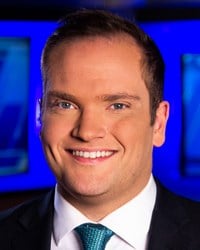 Greg Miller anchors KAKE News at 4pm and is a reporter for the evening newscasts. He joined the team in 2017, following a two-year stint as an anchor and reporter in Colorado Springs. There, he covered the indictment of the former sheriff and the Downtown Halloween Rampage and the Planned Parenthood Shooting in 2015. He also had the privilege of following the Honor Flight of Southern Colorado as they flew to Washington, D.C. and toured several monuments and memorials. He’s excited to bring his passion for storytelling to KAKEland now.

Greg has deep Midwest roots. He grew up and started his career in St. Joseph, Mo. He graduated from Northwest Missouri State University with a degree in journalism and political science. That said, he loves to travel – studying overseas in London for four months in 2010. He’s only made it to three of seven continents so far, but is working on getting to the other four.

Greg’s a huge foodie and has already fallen in love with the restaurant scene in Wichita. He also enjoys cooking, skiing, hiking and running with his rescue dog, Bentley. Feel free to connect with him on Facebook and Twitter, you’ll find a lot of news updates and plenty of dog photos. Thanks for the warm welcome, KAKEland!