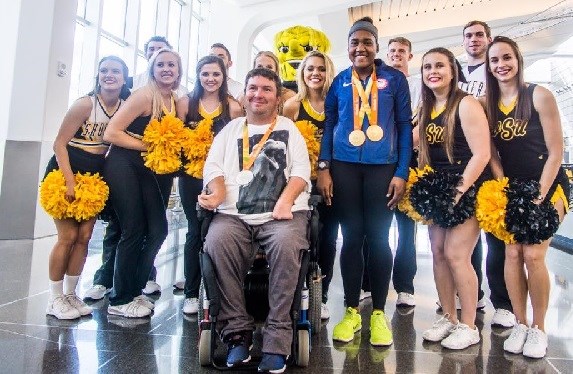 The Wichita State spirit squad, as well as teammates and other university representatives met both Young and Taylor at the airport.

"I got a text saying that there would be a few media people here," Young said. "Then I walked down and I see everyone and I'm just speechless."

"It still hasn't hit me yet," Young said. "It doesn't feel real at all. It still feels very unreal for me to have gone out and win two medals, two gold medals at that."

Taylor won a silver medal in doubles tennis with his partner David Wagner, falling to Australians Dylan Alcott and Heath Davidson by scores of 4-6, 6-4, 7-5.

"The tennis went well for me," Taylor said. "Making the quarterfinals in singles, I would have loved to medal again of course and in doubles with what he had, we did the best we absolutely could."