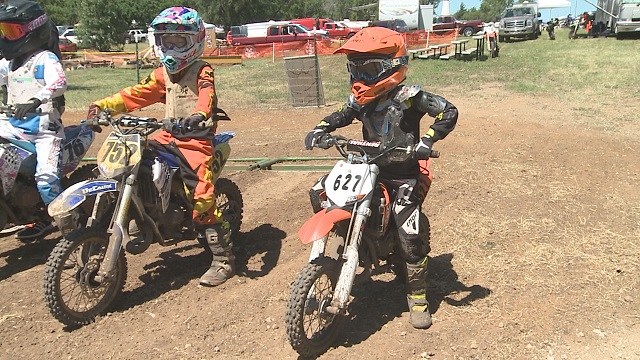 Boston Horn is very excited to be out riding his new dirtbike this weekend.

He's the seven year old little boy who's dirtbike was stolen about a month ago. Shortly after his story aired on KAKE news, viewers began reaching out. Asking how they could help get horn back riding again. Family friend and sponsor of Horn, Jimmy Harwick, says the response blew them away.

"That was amazing. Something we didn't expect. People just came out of the woodwork. We didn't know there was that many people that really cared," Harwick said.

Harwick says it was riding the dirtbike that really allowed Horn to break out of his shell.

"He was real shy, didn't want to talk to anybody. When we first got him on the bike it was like a bulb went off. He's just a new kid. We're so proud of him we don't know what to do."

With the help of family, friends, and complete strangers, the family was able to raise more than $1,000 toward a new bike through a gofundme page. They were then able to buy one from one of Boston's best friends just in time for him to race this weekend.

"Boston just, he deserves a bike and I know he loves to ride, so here it is," Samuel Ross, fried of Horn, said.

Horn's family is beyond pleased to get him back on the track.

"Every lap he goes out there he comes back with a big old grin. That makes everybody happy," Harwick said.

Horn has a message for everyone who helped him to get back to doing what he loves so quickly.

"Thank you for getting me the money to get a new bike."