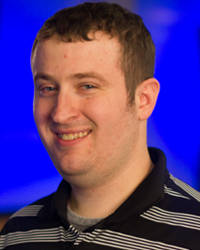 Chris produces KAKE News at 4 and the Midday show. Chris grew up watching KAKE but never imagined working with the same group of talented individuals.

Chris is a lifelong Hornet, graduating from Valley Center High School and Emporia State University; he later got his Masters from Southwestern College. Before coming to KAKE in 2014, Chris worked in education and 6 years as an award-winning newspaper reporter in Salina.

Chris seems to have an outrageous amount of spare time because he doesn't sleep and enjoys spending time with his family. He also plays terrible hockey at the Wichita Ice Center, tends to play video games too much and probably watches more Netflix than you.