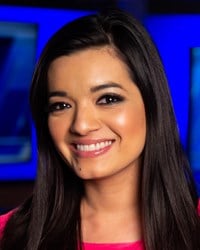 Emmy and Murrow-award winning journalist Annette Lawless joined the KAKE News family as an anchor and reporter in August 2013. You can catch her on Good Morning Kansas Saturday and Sunday at 6 and 8 a.m. and on Good Morning Kansas Monday through Wednesday from 4:30 to 7 a.m. She's often featured on Good Morning KAKEland. In the summer of 2018, Annette launched Missing in Kansas: an investigative series sharing a missing person’s story every day.

Born in Wellington, Kan., Annette got her start to journalism when she still had baby teeth. Often, she'd dazzle her friends with elaborate stories at the elementary school lunch table. Until one day, she gabbed too much and was shamefully penalized without recess for the whole day -- a true devastation for any 7-year-old. She's still a little bitter to this day.

She didn't stop talking, however. Her skill evolved into an elaborate public speaking career in high school, nabbing more than 75 awards in speech, debate and acting.

She was named one of the top public speakers in the country and soon made her move to the glitzy metropolitan of Manhattan... Kansas.

Annette graduated from Kansas State University with degrees in broadcasting, print journalism and public relations. She's since worked for ESPN and at TV stations in Topeka, Wichita and Cleveland. She received dozens of awards in producing, editing, reporting and photography from the Kansas Association of Broadcasters, the National Press Photographer's Association, the Cleveland Press Club, the Ohio News Photographer's Association and the Emmy's Great Lakes chapter.

Her biggest prize was meeting her husband, Tim, a fellow journalist in Wichita. They celebrated the birth of their first child in 2016.

Though a geek to the core, Annette can be quite the daredevil.

She's rappelled off 500-foot cliffs and climbed the Sydney Harbor Bridge. She loves photography, building websites, playing Nintendo and Tweeting. She also has a passion for acting and has been in more than 20 films, including The Avengers, Fun Size and Draft Day.

Some of her favorite shows are Gilmore Girls, Friends, Dancing with the Stars, The Wonder Years and Sex and the City. She also enjoys watching true-crime shows.

One of Annette's truest passions is cooking. Her husband recommends her cheese bierocks and German apple cake.

But no matter what, Annette's heart will always lie in reporting, where she gets to meet interesting people and talk all day long... with as much recess as she'd like.