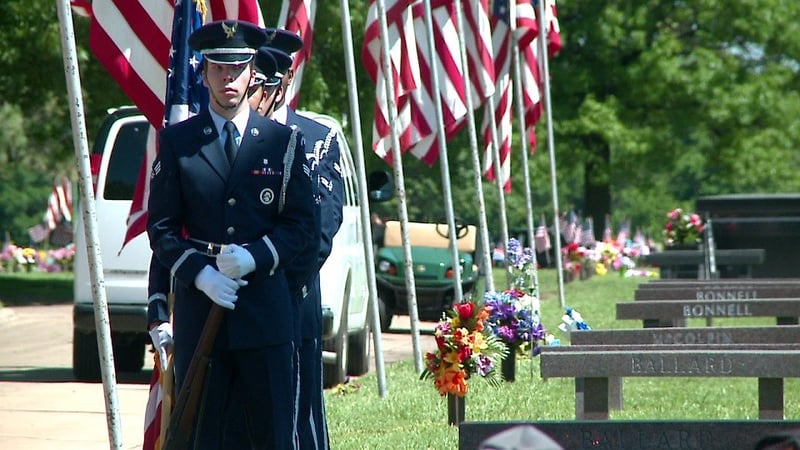 People throughout Wichita paused on their holiday to remember the real meaning of Memorial Day. Many people visited cemeteries to pay their respects.

"I came to honor the the men that gave all," says Ryal Edmisten.

A veteran, Edmisten served in between the Korean and Vietnam wars. He knows the toll that war can take.

"I had two brothers in world war two," Edmisten said. "They came home different men. It changed their life forever."

For the hundreds of people that came out to Resthaven, each one had a their own reason for being there. Vietnam Veteran James Denison said he would not want to be anywhere else.

"This is where you need to be, if you are deeply feeling for your country," Denison said. "For all those comrades; believe me there are plenty of monuments around me of comrades I have carried to their last resting place."

Senator Jerry Moran, R-Kansas, spoke to a divided nation about the need to remember that sacrifice has no party.

"Not a person who is memorialized here today or is memorialized at the World War II memorial, or the Vietnam wall or the Korean war memorial, not one of those people fought and died for Democrats and Republicans," Moran said.

Department of Defense data shows more than 1.1 million have died in service to this country since it began.

"To fallen soldiers let us sing. Where no rockets fly, no bullets wing, our broken brothers, let us bring to the mansions of the Lord," said Moran, reciting a favorite hymn.

Moran echoed the sentiments of many in the audience who are not veterans themselves, but who attended because they know the sacrifice that was made on their behalf.

Memorial Day was originally called Decoration day. It began as a way to commemorate the hundreds of thousands of men who died in the Civil War by decorating their graves with flowers and flags.